I heard her this morning, talking to her chicks.

I heard her, the bantam from the farm across the road who decided to come live with us and then decided to sit on a batch of eggs somewhere in the dense bushes beside our house.

Six nights ago, when we guessed Aunty Dorrie’s eggs were due to hatch, my husband heard the chicks peeping. It was late evening when chicks shouldn’t be making a noise so I guessed they were either just hatching or something was hurting them. I am hoping that they were hatching.

Since then we have been at work every day so haven’t seen or heard anything.

But this morning about 7am, I was outside and heard the familiar sound of a mother hen talking to her chicks. How lucky I am that I have experienced a mother hen bringing up her chicks so I know what to look and listen for. The main thing that worries me is what are they eating. My last chicks were fed chick crumbles but there are no chick crumbles in the wild. I have water near where I know the nest must be and so I hope she is bringing her chicks out for water. Chicks drink such a lot of water.

A least I know she must have at least one chick that has survived the week.  I’m glad I heard her.

I decided around mid morning that today was going to be the day. I reread everything I could find about how old chicks should be before you can free range them with mama hen and I found ages ranging anywhere from 2 days to 8 weeks.

My chicks are almost 6 weeks old and they have a very protective mama so I am sure she will look after them. Time for me to be brave and put my trust in her.

I decided to let them out in the evening so that they are not out for too long before bedtime.  Hopefully they can’t get into too much trouble in that short time. Hilda and Helen Hen were bribed with treats and locked in their run before letting the chicks out so that they didn’t pose any threat to the chicks or to mama who will have her hands full while the chicks are out.

I gathered the essentials (camera with zoom lens, treat bribes and a cushion for sitting on the grass) and with a pounding heart, I walked towards the coop.  I hesitated as I reached down to turn the catches. What if they all just run off into the bush, never to be seen again. What if one of them gets lost and mama is too busy trying to manage the remaining four and one of the chicks is lost forever? Maybe one of my essentials should be the butterfly net, just in case. No, be brave and put your trust in mama hen.

I reached down and turned the catches and opened the door and stood back. Mama looked quizzically about and then sauntered out of the run, bokk, bokking to the chicks to follow.

They didn’t run off into the bush. They started scratching and pecking the ground outside the coop and it just seemed so right that they were outside. They all stayed near mama and where she went, they went. peeping and chirping as they went.

Then they all thought they heard something that they weren’t so sure about.

And they scurried back to safety. With a few of their favourite treats scattered into the run they all filed happily back inside and I shut the door.

Someone asked me the other day if mama hen and her chicks get bored in the run all day.

I have decided that I will let the chicks free range with mama hen for an hour or so each day from about seven weeks. If they begin to free range while mama hen is still caring for them, they will probably learn to be “street smart” a little quicker.

So meanwhile, do I think they get bored in their run all day? I don’t think so. Not on hot days when there are pesky flies around. This fly got away after an ungainly pounce from chick.

My partridge wyandotte bantam chicks at 9 days old. Much bigger and with barred wing feathers starting to grow. 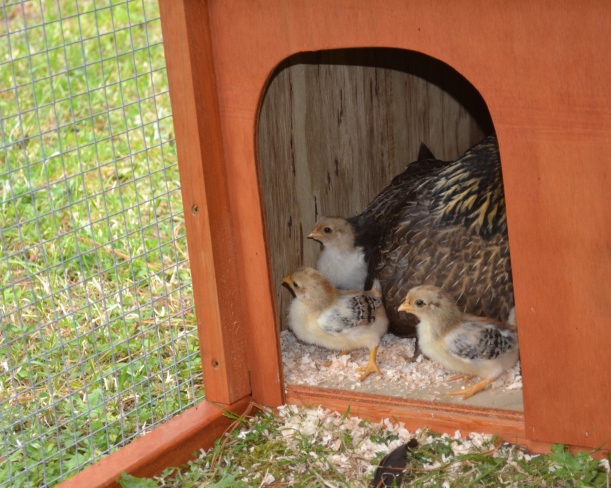 My partridge wyandotte bantam chicks at 16 days old. Much much bigger and the barred colouring is all over their wings and their backs and they have bits of fluffy down sticking out. Someone visited today and thought they were baby ducks. It must be the little tail feathers that have started to grow.

I can’t believe they are growing so fast. They are changing daily!

I couldn’t sleep last night worrying that my chicks were dead before they even had a chance to hatch.

So I got up near midnight and started working on plan b. I would give these eggs till Saturday afternoon to hatch. That would be day 22.5. Plan b was to find some baby chicks for sale to slip under her and trick her into thinking they were hers.

So at midnight, there I was searching Trademe (New Zealand’s equivalent of Ebay) for newly hatched chicks for sale close to where I live. I wasn’t expecting to find any but there they were. Just down the road from where I live were baby “Silver Laced Wyandottes, Splash Buff Laced Wyandottes and Light Sussex hatched 7th November“. So plan b was ready to put into action if I was going to be a first time chicken mother failure .

So then I spent the next thirty minutes lying in bed trying to sleep with my mind on which breed of chicks I would choose. So about 1am I started thinking this is very silly. I have to get up at 6am for work. I need to try to get some sleep.

So I switched the light back on (I had gone into the spare room by this stage so as not to disturb Haitch), sat back up and picked up my book, Leningrad Tragedy of a City Under Siege 1941-44. And as the title suggests this is not a light read, so this should take my mind off the chickens and help me to sleep. And it worked. I was asleep about 15 minute later.

So this morning before I went to work I rushed out to see if there were any chicks, gently lifted the nesting box lid, still no chicks. At least I was happy that I had a plan b ready to go, so all was not lost and off I went to work.

Tonight we didn’t get home until 7:30. I tried to not look too eager and nonchalantly changed into my old clothes, gave Hilda and Helen some treats and then steeled myself to look into the nesting box.  First I listened outside the box hoping to hear peeping of little chicks. Nothing.

So with a degree of sadness, I lifted the lid of the nesting box…………………There sitting in front of Hannah Hen was a tiny little dark coloured baby chick. But then that instant, there out of the corner of my eye, I saw a very large spider running towards me on the lid of the nesting box. I put the lid down quickly and ran inside yelling out to Haitch. “I have a chicken but I need to you come and kill a big spider!” “Hurry!” I didn’t want the spider to get into the nest. It was huge and may have caused mayhem.

So we both went running back outside and Haitch got rid of the spider for me and then we both gently lifted the lid of the nesting box and peeped inside. The chick had disappeared underneath her mum, probably terrified by the spider commotion.

Did I imagine a chick? No, because there on the floor of the hen house was an egg shell. I peeped back in a few hours later and there was no sign of the chick but another eggshell was on the floor. How wonderful nature is.

I will go out again tonight before I go to sleep for one last check to see how many egg shells there are.

I worked from home yesterday and today so that I would be home for the hatching of my babies!

It seems that I misjudged the hatching day terribly or the three hours that Hannah Hen spent sitting on a golf ball instead of her eggs were more detrimentals that I thought.

Apparently the hatching time for these bantam eggs is anywhere from 19 days to 21 days. I put the eggs under her on the evening of the 1st November so that makes tonight the 20th day (or night actually). So I am still hopeful that they will hatch.

I have read that you can hear the chickens pipping in the shell (whatever that means) before they hatch so I have been lying outside the coop with my ear to the outside of the nesting box willing myself to hear pipping. (Not all the time of course, only every few hours.) But no. No sound. I even went out with a torch and lay in the dark before I went to bed. I think Haitch thinks I am nuts but oh well. Maybe I am.

I have been wanting to take photo of her sitting on her eggs but I am worried that the flash will frighten her and cause her to abandon then nest. I can’t risk that at this late stage so I will continue to wait and continue to be hands off. I have decided not to candle the eggs and just wait and see.

UPDATED a few days later.
I have found out what pipping means. http://thechickenstreet.wordpress.com/2012/08/27/whats-an-egg-tooth/