I have six adult chickens and six chicks. One of the chicks is free ranging with her mum and has been since she was four weeks old. Mum does a good job at looking after her.

But my five chicks that were hatched in an incubator don’t have a mum to protect them from the big girls but I wanted them to have plenty of space to run around in.

I went online and here is the answer to my problem. It is Omlet temporary chicken fencing, now available in New Zealand. It is easy to put up (once you know how) and is easy enough for one person to move when the chicks need fresh grass every few days. The chicks have been using this fencing now for about four weeks with no problems. I was a bit worried to start with that they might tangle themselves in it or the big girls might fly over into it but of course that didn’t happen. Just me being a worrier when I am at work all day, leaving the chicks and chickens to their own devices.

I would be careful though if you had dogs or predators around. This is definitely not a predator proof fencing but a temporary chicken fencing. We are lucky here in New Zealand that we are essentially predator free and I do not have dogs that come onto my property (touch wood but not so far in four years of having free range chickens). Read the reviews if you are unsure before you buy this fencing.

This allows my chicks to be amongst the rest of the chickens, meaning I should have less problems integrating them once I decide they are big enough to take the fencing down to join the rest of the flock.

I knew one day the time would come when I would have my own Orpington chicken.

A couple of months ago, I bought two Plymouth Barred Rock chickens, Hillary and Henley, in their first laying season. I bought them because I needed to boost our egg production. 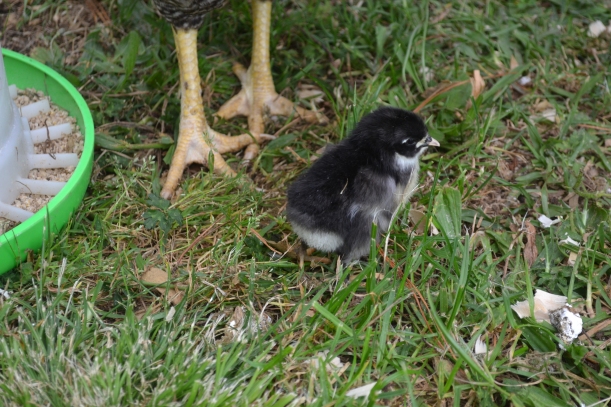 So of course, I called my friend and within a few hours, she had delivered four fertile eggs from her wonderful brood of Orpingtons. She recently had to get rid of one of her roosters and so was unsure of how fertile the eggs were.

Henley had been sitting tight on her golf balls for three days. I had read that it was best to put eggs under a broody at night when they were sleepy and less feisty and they will be more accepting of the eggs. My last broody was a very  protective mama and would try to attack me every time I went near her. She would come at me with claws and wings out, and her beak open. She was one scary mama.

But Henley was a very friendly girl and even as a broody she was quite happy to eat out of my hand when I offered her food on her broody nest. So I don’t think I need to wait until dark. I hobbled very slowly outside (I had just had a foot operation a few days before) and reached under Henley to remove the golf balls. I had to give her a little nudge to get all of them. After a few gentle bok boks, Henley wriggled herself and settled right down on top of those eggs.

Twenty one days later, she hatched one beautiful Orpington chick and discarded the rest of the eggs two days later. (I checked and they were infertile.) I am hoping my one Orpington chick is a girl. If not, I will have to try for my Orpington another time. I think she is a girl. Time will tell.

The first time I used my incubator, I had a complete failure (problem was with the eggs, not the incubator). This time I had five eggs hatch out of six. 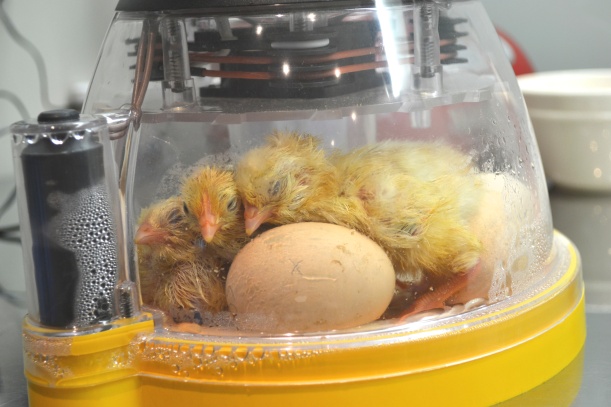 When I got home from work there was one chick hatched and another two hatched shortly after. (I think the second two waited for me to get home so I could watch them.)

Then another one pipped. You can see the little egg tooth peeping out.

Then it zipped it’s way around the egg. 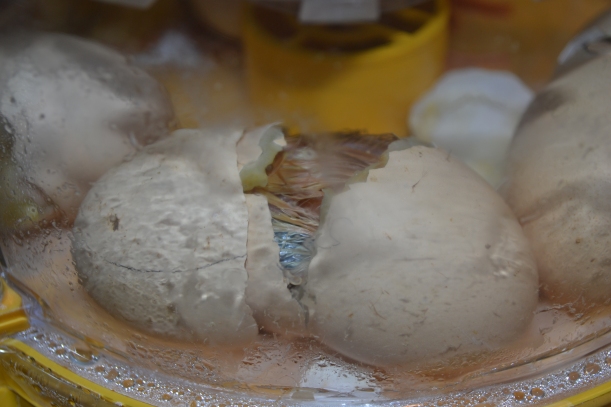 Then it pushed on the shell to make enough room to get out.

Exhausted and time for a sleep. After all, the pip did start at 7pm and the chick greeted us at 1:30am. Ah, hrrm, yes, well I did sit up watching the whole time. It was my first hatch after all. One of the previous chicks pipped, zipped and greeted us all within 20 minutes. These are Speckled Sussex chicks.

I bought an incubator because I had two roosters and no broody hens and wanted more chickens.

I bought two Plymouth Barred Rocks at point of lay as I desperately needed to boost our egg production.

Now I have no roosters (so no fertile eggs for the incubator) and one of my new Plymouth Barred Rock girls is broody (so a sudden reduction in my daily egg production)!

Oh well, at least I will have baby chicks.

Henley is a first time mum so I hope it all works out. She is sitting on four Orpington eggs that are due to hatch in the next few days.

We had the incubator humming quietly away in our kitchen for 23 days with no sign of hatching. The eggs were due to hatch on day 21. On the morning of day 24 I gave up and turned the incubator off.

I had candled the eggs at day 19 and thought that at least one egg (a cream coloured Plymouth Barred Rock) had a fully formed chick inside and potentially one of the Barnevelder eggs but it was difficult to see inside their brown speckled eggs.  This was also my first time candling eggs so I wasn’t really sure what I was looking for.

That evening I broke open the eggs to see how many were fertile and at what stage had any chicks died inside the shells.

Six of the seven eggs were either infertile or hadn’t started to develop for some reason, possibly because they were too old at the time of setting the eggs. The seventh egg had a fully formed chick inside that had absorbed most of the yolk so must have died just before it was due to hatch. I have since learnt that I shouldn’t have candled the eggs after day 18 when the incubator goes into lockdown, so I am guessing that may have harmed the chick.

I was of course disappointed with the outcome but then I did know there was only a slight chance that the eggs were still fertile after losing both our roosters a few weeks before setting the eggs.

I now have six Speckled Sussex eggs that I bought off Trademe (New Zealand’s equivalent to eBay) in the incubator. They are a reasonably rare breed in New Zealand so I hope they hatch. They are due on December 6th.

My chickens do not go broody so I bought an incubator.

Well, that is not entirely true of course. Aunt Dorrie, my bantam has been broody many, many, many, many times before but for numerous reasons, has not resulted in any chicks.

It all seemed to happen at once. We decided to increase our egg production and bought two beautiful Plymouth Barred Rocks in their first year of lay.

We also bought an incubator to hatch some of our own eggs since we had two roosters and were not having any luck with broody hens. Hannah Hen did go broody a few years ago and hatched chicks from fertilised eggs we bought, but hasn’t been broody since. Possibly something to do with the fact that she is almost 8 years old. The two Barnevelders have never been broody in their three years.

So an incubator, it is.

The following weekend we had to get rid of Jonathan Livingstone Seagull.

With King George gone, Jonathan Livingstone, my Silver Spangled Hamburgh, took his place but as the main rooster he started terrorising my girls. He chased them relentlessly. They were running for dear life and squawking and even flying against the glass doors to get away from him. Hilda, my usually slow moving Barnevelder, ended up running into the hen house with Jonathan close on her heels. She jumped into the nesting box to get away from his terrorising advances. Jonathan relentlessly paced up and down the hen house waiting for her to get out of the nesting box. He finally gave up and came out and chased the others. Hilda stayed in that nesting for a full 24 hours.

Needless to say all egg production ceased that weekend and Jonathan was “taken away” the very next day.

So now I have an incubator and no roosters. If I could get some eggs into the incubator this week, fertility shouldn’t be an issue. With George having been so ill, he had not been doing his roosterly duties but Jonathan more than made up for that. But did I really want his aggressive genes in any of my chicks?

We were going away on holiday in a few weeks time and if I set the incubator this week, we would be away when the eggs hatched. That would be no good.

So we set a mixture of Barnevelder and Plymouth Barred Rock eggs in the incubator a week or so later. The chances of the eggs still being fertile were fairly low, but it is worth a try. I have low expectations so won’t be too disappointed if nothing hatches.

The two Plymouth Barred Rocks we bought a month ago have settled in surprisingly well. Even Helen, our resident “not very nice” chicken didn’t bother them, apart from the few raised hackles when the girls were confined to the coop. Maybe it helps that these girls are bigger than my Barnevelders.

We got these girls on a Saturday and kept them locked in a coop where the others could see them. On Monday I had to take a day off work to take King George to the vet where he was put down. That afternoon when I got home, I decided to let the new girls out for a few hours while I was there to supervise. Ever since they arrived at our place, they have been very friendly girls, even coming over to me whenever I opened the door of the coop and letting me touch them. I was pretty sure they were not going to run away.

I let the girls out and sat on the grass beside them to supervise. No supervision necessary. The girls all mingled together, a little bit apprehensive of each other but no fights. In fact they were so good, that when I went to work the next day, I let all of them out and they have been free ranging together ever since then.

And I can even tell them apart. Henley has a smaller comb and is not quite as big as Hillary.

I think I have been very lucky.

My Tiny Brood of Backyard Chooks
Create a free website or blog at WordPress.com.